With a new website comes a Changeling update of course!

I’ve made a changeling tab where you can find an explanation of the game and my general plans for it. You can find it HERE

I haven’t been sitting still the last few months and last Tuesday I finished a first version of a demo for Changeling. The demo features around 30 minutes of gameplay and shows how to copy people, move between scenes and use items that you’ve found to help the people in the game. It has two scenes and a different story than the main game because there were some characters missing from the demo that were needed to implement the final story. 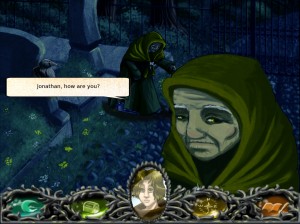 I’ve tested the game with several people of different age groups and finally sent it to a big casual games publisher to see if they would be interested in publishing the game on their portals.

Their response was positive and negative at the same time, saying that they enjoyed the game themselves, but that they weren’t sure it would resonate with their target audience. They’ve send me some feedback that they would like to see implemented in the next build and encouraged me to continue working on the game.

Firstly they want to see a more elaborate and interactive tutorial, as this is what their audience is used to.
I’ve seen this a lot in different casual games and understand the need for it if I can have any hope of being published on their websites. I should have no problems utilizing my game design skills to create a great tutorial.
The second part of the feedback was on the graphics, saying that it “didn’t exceed expectations”. That it would have been good enough if I had published this game a year ago but now their audience preferred something better.
I wasn’t sure what they meant by this so I’ve asked them to elaborate on that a bit more,

Since I’m making the graphics by myself, making them “better” will be difficult. What I can do, is make everything a bit less static, adding animations and maybe some different facial expressions. One of my testers suggested to add “cut-scenes” to interrupt long stories and make sure the player has something interesting to look at during the game and not get bored. This seemed like a very fun idea!

All in all, I am very proud of having made my first deadline and demo and hopeful for the future of Changeling,
The next weeks I’ll be working on the new tutorial while I wait to see if the publisher will reply with more feedback on the graphics.