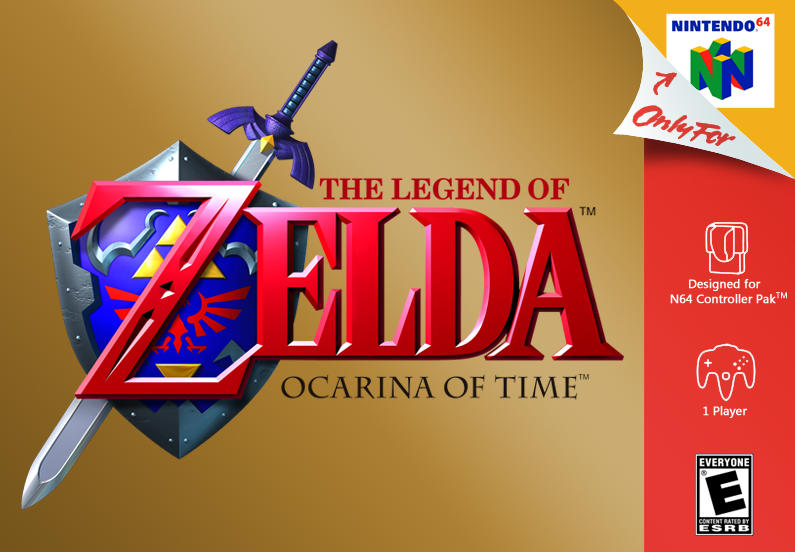 The second best game of all time according to gamerankings.com, Ocarina of Time was the first Zelda game to be developed in 3D. I remember how much I personally was looking forward to it and the buzz there was about this game, the wild speculations about needing 24 hours to walk across Hyrule and playing through the entirety of Link’s childhood… [sigh] ah nostalgia.

Although I personally do favour Majora’s Mask, Ocarina of Time is one of the best games I have ever played. But because I have so many fond memories of playing through it with my brother, it is hard to look at it objectively.

When replaying it I noticed a few things, the main thing was how little adventure controls have changed over the years. Being one of the first 3D games you would expect the camera to be messy and the controls confusing but Ocarina of Time already does all these things correctly. I think the main thing of why ‘it feels right’ is that the camera is very easily manipulated by turning it manually, snapping it back behind the character to instantly see where you are going and using it to focus on important events with the help of your fairy. This helps you find your way around the world.

One particular thing I’ve always liked about OoT is that it introduced the targeting system. By holding down a button your character would face (and lock onto) his opponent, this made the combat much easier but when you released the button the focus would disappear, making it easy to run away or avoid combat altogether without having to worry about a camera that was facing the wrong way.

OoT is in many ways similar to super Mario Galaxy: the game focusses on discovery, has very different themed dungeons (worlds), introduces one new game element at a time and lets the player master it before introducing a new one.
What it does differently are the tutorials, the game focusses less on “show, don’t tell” and does a lot more explaining by using text. This can be confusing to young players, especially if the game is not localized. To overcome this, the game visually displays the buttons that can or have to be used in the text and on the default UI.

It also highlights words that are important in the texts, although I do wonder how much this helps the players who can’t read the language that well.

Luckily, there is a lot to see in OoT, I’m still surprised at how big the game world is. Just when you think you’ve explored it all, a new area opens up or the world changes making it worth to revisit everything. The player is rewarded for taking extra time to look around with rupees, which can be used to buy upgrades, heart pieces which increase maximum health, or other items such as pouches or refills of depleted items. After discovering new areas the player might be granted a song for faster transportation there. This makes travelling more manageable and makes sure the size of the world does not become a negative element while running between dungeons.

I found the dungeons very interesting to play because, although every dungeon is different in theme and set-up, they all have the same underlying pattern.

After the dungeon, the skills and item the player learned and received are used in the overworld to progress the story or open up new areas.

The fact that every dungeon has the same pattern makes them exciting to get into, the player will be curious about the item that is granted or look forward to the new boss challenge that awaits them. While still being different enough from the previous dungeon to not become boring or predictable.

To wrap things up: As with Super Mario Galaxy, there are many elements that make this such a high rated (and great) game. But I think the main thing in this case is the time when this game came out. OoT was one of the first games in 3D and definitely one of the first games that did it so well. The fact that there are many games this day that borrow from OoT proves this.
Because of its size, playing the game felt like stepping in a different world and, because Link himself is a fairly blank character and the controls feel logical, it is easy to imagine yourself in his place while controlling him on his adventure. Combine these things with a well written but uncomplicated story, interesting characters and places for the player to discover and you have an experience that a child will remember the rest of his (or her) life.

This entry was posted in Gamerankings top 100, Press Play to Pause and tagged game analysis, Legend of Zelda, n64, Ocarina of Time, play to pause. Bookmark the permalink.