Posted on September 20, 2015 by Adventurous Imp

The wolf among us is a Telltale adventure game that was based on the Fables comic by Bill Willingham. The game is made up out of separate chapters or episodes which together form the entire story. The wolf among us is a detective story, in which you play the sheriff of “fable town” and have to solve a crime. The game’s main structure is made up of a series of choices, which are advertised to be so important that they change the course of the game and story, but somehow these choices still end up feeling unimportant because every one of them leads back to the same point eventually. I personally do like the game though, the story and setting were entertaining and it’s interesting to see how the illusion of free choice is created but I will get to that later.

Point and click
Even though the game is classified by many as a point and click adventure game it feels very different from the classics. Mostly because the tempo is higher and there is more focus on action instead of solving elaborate puzzles. Most events have a limited time to be completed and this made me feel very under much more pressure compared to a regular point and click. Because the game steps outside of the expected patterns of the genre, I was surprised when I encountered the first action scene. (which is fairly early in the game) The combination of unexpected action, a strict time limit and a sudden change of controls without proper tutorial caused my character to receive a heavy beating and left me somewhat shaken. Which brings me to the usual gameplay/controls subject:

3 sets of gameplay
The gameplay of the wolf among us is interesting to discuss because it varies depending on the situation and can be boiled down to 3 different sets: Investigation, conversation and action. During the game these are mostly kept separate but in some case they can overlap. 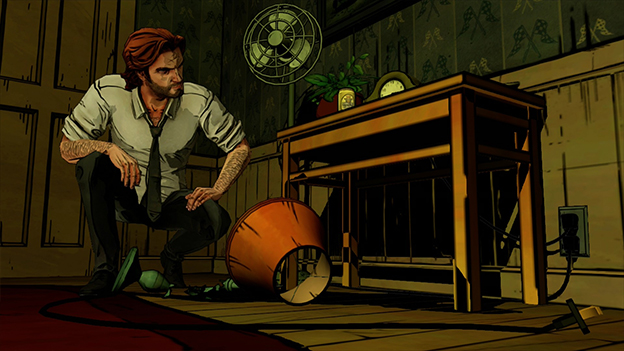 “Investigation” is when the player is able to walk around and click on items, gathering information or pick-ups that can later be used in conversations. What’s interesting about investigating is that it’s actually the only time in the game the player is allowed off the imaginary amusement park ride and is able to interact with their environment directly. The actions are very limited and the places to walk around in are usually very small, but it still gives the illusion of having freedom before the ride continues. In my opinion the sense of freedom is created by the ability choose what to interact with and in what order. Also, the idea that you could influence the case because you decided to search an area thoroughly contributes to this feeling. Or perhaps it is the idea of giving the player the responsibility to look for evidence? Besides all this, investigation is also the part of the game that reminds me most of the old fashioned point and click genre. 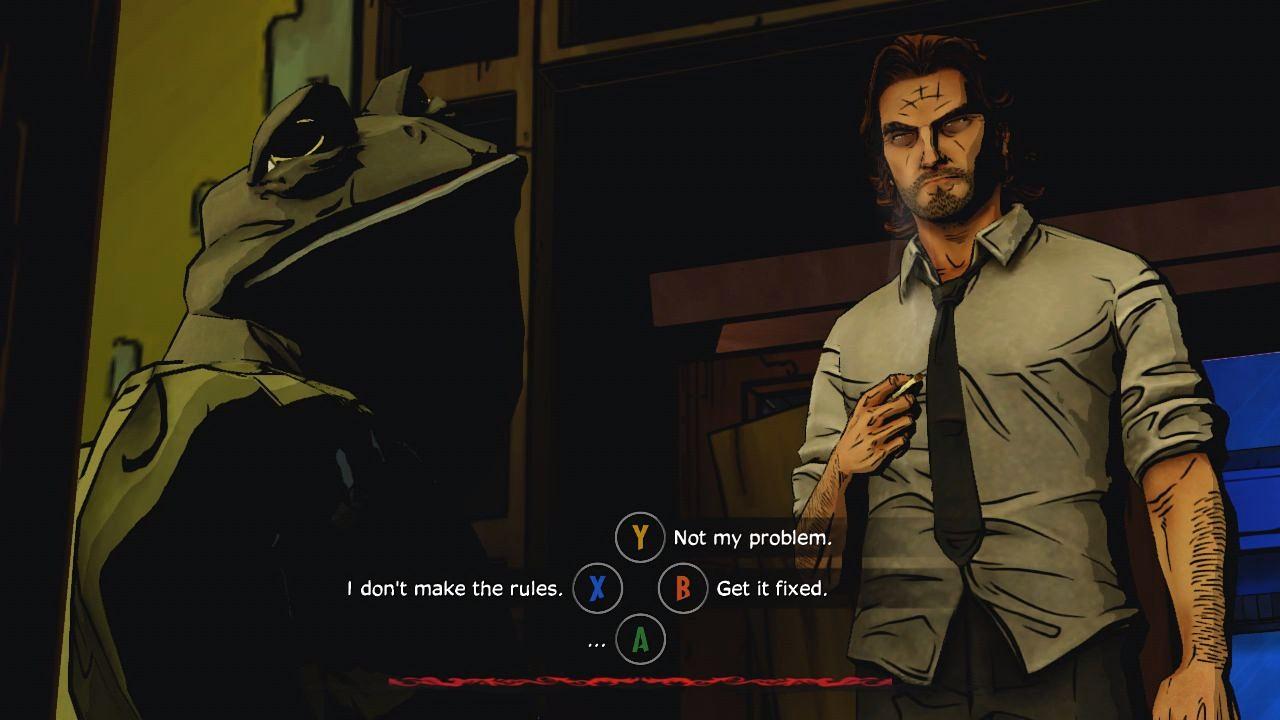 “Conversation” is a sort of “create your own adventure” novel, on speed. The player can choose how their character will react in certain situations. The choices have to be made within a time limit or the character will remain silent or do nothing, which is also a valid response but not always the desired one. The options that can be chosen to respond are usually the same: aggressive, directly, friendly or silence. Changing the conversation depending on which choices you make. The illusion of freedom is also created by these interactions. It feels very real at the start of the game and the key to it is, no matter what option you choose, your character is never ignored by his conversational partner. They always acknowledge his emotion, outburst or silence before talking about anything else. But after playing through the same conversation twice, choices are revealed to have a very limited direct impact on the conversations and story. They simply acknowledge the player and then go back to the predefined conversation script. The characters may refer to an earlier choice later on in the game which contributes to the feeling of importance, but never affects the story in a real way. As for the time-limit when having conversations, I’m not particularly fond of the “choosing under pressure” mechanic but it does make certain subjects feel more important and gets a more natural response out of the player. I would have liked an option to take my time responding though, as I like to think on how my character would respond (roleplaying) and not go by my own feeling. Weighing all the options in a conversation is also a way to make certain choices feel more memorable. 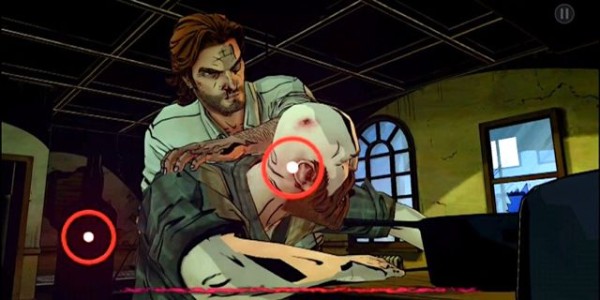 “Action” is the last set of the game mechanics and is basically a set of quick time events. These are used for fight and chase scenes (which are frequent) and must be completed within a time limit or the player will fail and have to start over. It feels very different from the rest of the game and can become quite frustrating when failed. Most controls are self-explanatory; an x on screen usually means you have to press it, but there was one action I did have difficulty with understanding at first, which was placing your trigger over the target and pushing a button afterwards. I suspect this probably worked better on mouse/keyboard but didn’t translate so well to controller. In my opinion, when changing required input device for a game, mechanics should be looked at objectively to see if they still function and changed accordingly if they don’t.

In short
The wolf among us is a parlour trick and gives the player the illusion of freedom and importance. Interestingly, this is something a lot of games do these days but unlike the Telltale games, are hardly ever called out on. Perhaps it is because these games focus so much on the narrative, that players see the flaws in them and notice they are not as dynamic as first believed?

All in all, I did find the wolf among us to be an entertaining game that I played through until the end. The main reason for this was that I really did like the setting and characters and wanted to know how the story ended. That being said, I would have liked this just as much as a film, maybe even more.