Posted on September 27, 2015 by Adventurous Imp

It’s been a while since I had played Metroid prime and going back to it now, 13 years after release, I’m still amazed at how good the graphics look. It’s obviously an old game, but it is one of those few 3d games that has aged really well. This is most likely caused by the material choices, metallic and mechanical shapes and textures are easier to create and will look more convincing in low-poly 3d and with smaller textures. Metroid is a first person sci-fi shooter with unusual controls. Moving and rotating are all mapped to the left analog stick and you can look around by pressing and holding the right shoulder button while moving the left analog stick at the same time. This takes some getting used to but is made easier by the auto target function, borrowed from Zelda, that can be used to lock onto important environmental things or enemies. I’m sure there are other games with the same control scheme, especially on older platforms where controllers only had one analogue stick, but I’ve never played them. 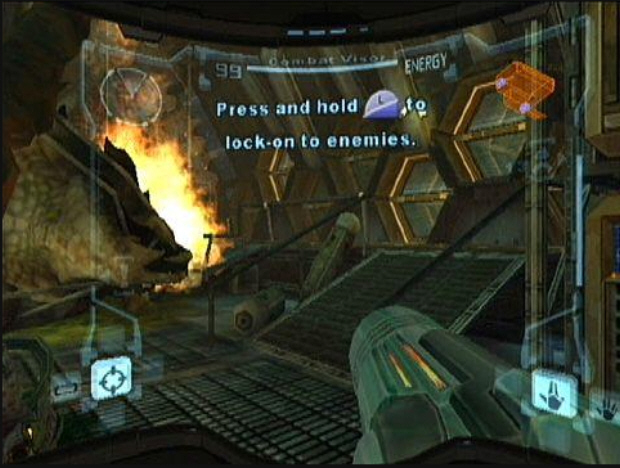 games the controls feel very strange at first. The auto target doesn’t always work flawlessly and it can make combat challenging, sometimes almost clumsy feeling. During combat there are a lot of things going on, adding to the confusion of a player new to Metroid. The player has multiple abilities and items at his disposal which can or have to be used to defeat enemies. The most important things are the different visors that are in the game. Visors are HUD overlays that give the player different information about their environment or enemies. Switching to a non-combat visor will make the player unable to attack the enemy and gather information instead. Getting used to switching visors in combat cost me some lives and made combat an unpleasant experience at first.

The auto target is not the only thing borrowed from The legend of Zelda, Metroid Prime also has a similar discovery and reward system. The gameworld is divided up into different themes. Each theme can be viewed as a separate hub or even dungeon with its own enemies, puzzles and final boss. These hubs also have a specific item or power-up that is awarded to the player. This power-up is needed to advance in the second part of the hub, kill the boss and open up paths to the next hub. For instance in Metroid, the player gets torpedoes to open doors, morph ball to get through smaller spaces and the thermal visor to find invisible enemies. In Zelda, the player gets a boomerang to flip switches, a blue tunic to breathe underwater etc. The manner and pacing in which these items are received and used are very similar.

There is also a lot to see and 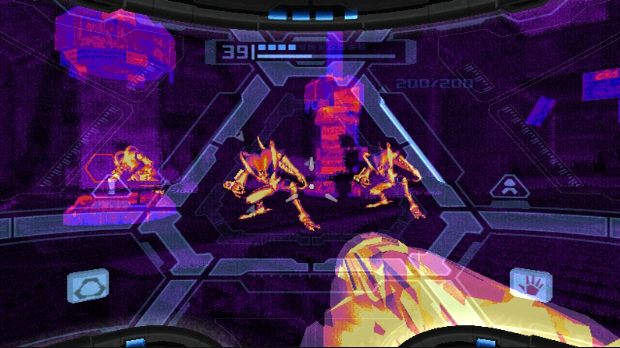 experience in Metroid and the first non-combat visor you receive is the scanner, which makes you take the time to look at your environment and scan enemies or objects for more information (which is also used as a way to tell the story in this game). The scanner is also used to activate certain environmental objects, such as elevators and to gain information about bosses and how to defeat them. This ensures that the player keeps on using the scanner throughout the game to look at the environment since some players might not be as interested in additional (useless) background information to use the scanner without incentive.

There is a lot of overlap in the basic structure of the topranking Nintendo games. Metroid also is a game that lets the player be in a constant sense of discovery. It contains an array of different environments and different enemies that need to be found and overcome. You are then rewarded with a new item to try out and can backtrack to open up new paths in already discovered areas. One of the negative things about this game is that it is not one to easily get into. Personally, I’m not fond of the combat system, I found it confusing and switching between visors did not feel natural. It could be because I’m so used to having the camera on the second control stick and that would have certainly made things easier, but I would have made some form of combat possible at all times, instead of locking it away when using certain visors and making players panic when under attack. Save points are hard to find, usually hidden in a side room, and this can make it frustrating when you’re not comfortable with the combat system and have to do the hub again because you missed a save point midway. Despite all this, Metroid is a game that made me continue playing, I’d say things as: “just until the next savepoint”, “I just need to kill this boss” and “I just want to see what’s in the next room” which usually meant I’d play for several more hours because I’d want to see the room after that as well.